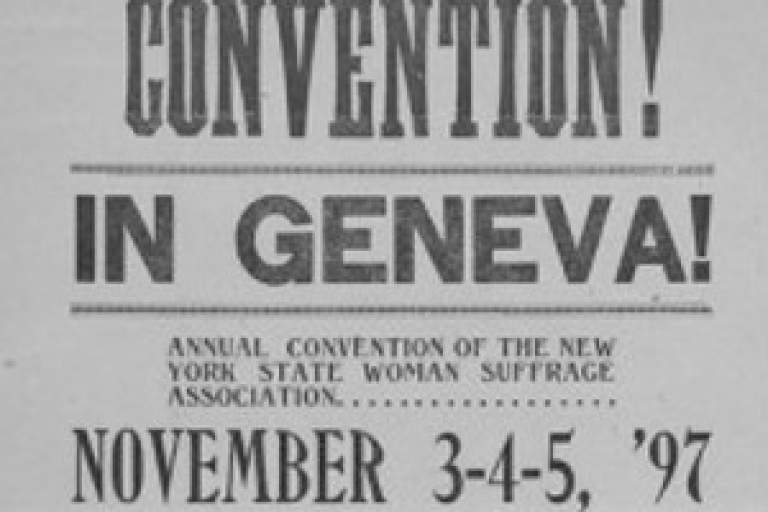 The first new pages interpreting annual conventions of the New York Woman Suffrage Association held in west-central New York State between 1890 and 1914 will "go live" in early March on the Freethought Trail.

This is the first of almost forty new Sites pages that will be added to the Freethought Trail during 2020 as part of the Trail's commemoration of the centenary of U.S. woman suffrage. New pages will "go live" in batches between early March and August 26, the actual 100th anniversary date.

To prepare the Trail website to present this new material optimally, a new interpretive category—Events—was added. This required new programming by Ingenious Inc., designer of the website. Then Center for Inquiry personnel created some 137 new Events pages, the same number of pages created for historical sites since the Freethought Trail debuted in 2005. Content for the new pages was developed by Julia Lavarnway, managing editor of Skeptical Inquirer magazine, and Nicole Scott, managing editor of Free Inquiry magazine, of the Center for Inquiry's editorial department.

To access the new Events category (starting March 3, 2020), visit www.Freethought-Trail.org and scroll down to the headline "Browse Historical Sites." "By Event" will be among the options.

The Freethought Trail is a project of the Council for Secular Humanism, which also operates a museum at Ingersoll's birthplace in Dresden, New York. The Trail celebrates west-central New York's rich history as a hotbed of nineteenth- and early twentieth-century radical reform activism in areas such as abolitionism, woman's rights and suffrage, freethought, dress reform, Utopian communalism, and more. Visit www.freethought-trail.org.

About the image: Poster for the twenty-ninth annual New York State Woman Suffrage Association convention, held in Geneva in 1897. This is the first statewide suffrage convention interpreted by the Freethought Trail; information relating to this convention and its three venues has been available on the site since 2017.