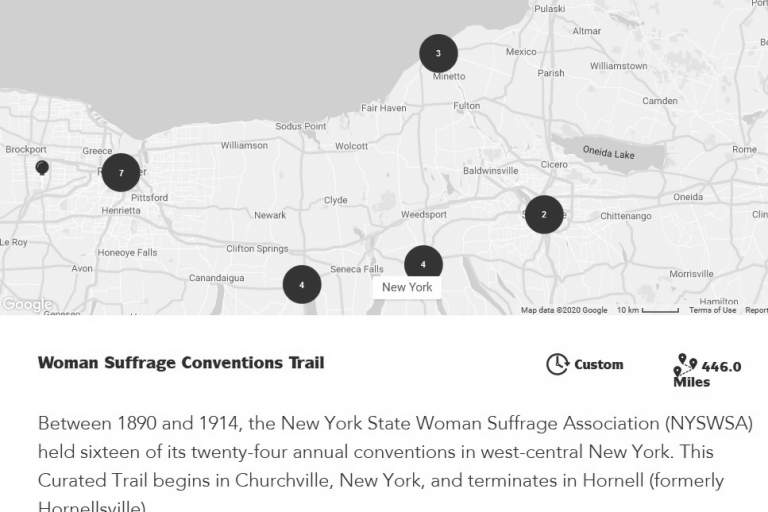 A seventeenth Curated Trail has been added to the Freethought Trail. The Woman Suffrage Convention Trail identifies and interprets all the venues at which sixteen influential woman suffrage conventions were held.

The Woman Suffrage Convention Trail encompasses thirty-one sites. It extends some 446 miles from Churchville, east of Rochester, to Utica and back to Hornell (formerly known as Hornellsville).

Between 1890 and 1914, the New York State Woman Suffrage Association (NYSWSA) held sixteen of its twenty-four annual conventions in west-central New York. Activation of this Curated Trail caps the Freethought Trail's celebration of the centenary of U. S. woman suffrage (the Nineteenth Amendment was ratified on August 26, 1920.)

Premier suffrage leader Susan B. Anthony keynoted the majority of these conventions, at least until her death on March 13, 1906.

To follow this Trail -- the lengthiest of the Curated Trails -- is to recapture the energy of the nation's most active state-level suffrage organization as it campaigned toward the goal it would achieve in the year 1920 with the Nineteenth Amendment to the U. S. Constitution. 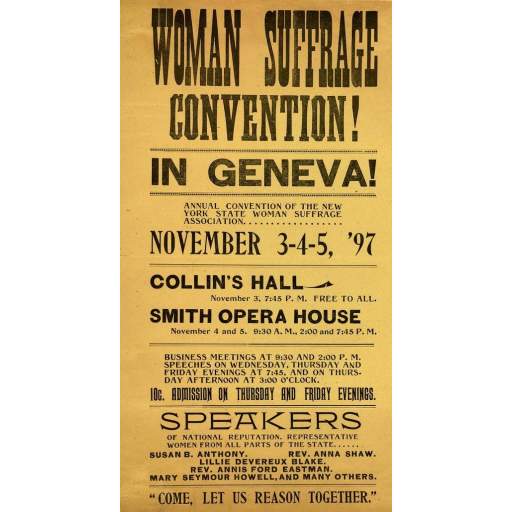 Poster promoting the Twenty-Ninth Annual Convention of the NYSWSA, held in Geneva in 1897. It was one of two conventions held in this modest rural community, owing largely to the activism of suffrage leader and Geneva resident Elizabeth Smith Miller.