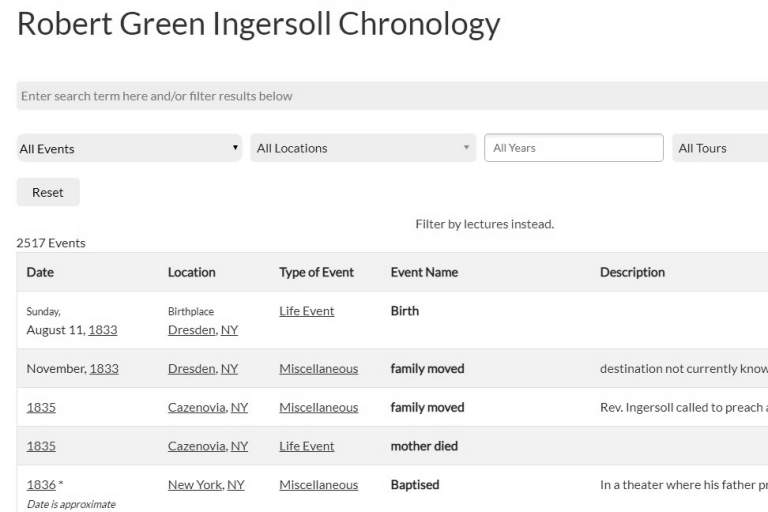 One of the most powerful online tools for researching the career of Robert Green Ingersoll, “The Great Agnostic,” is back – and more formidable than ever. The Robert Green Ingersoll Chronology recently went live at https://chronology.secularhumanism.org/. The site permits interactive online searches of the life of Ingersoll. It comprises 1,345 public lectures, 113 political speeches, 344 letters, 217 interviews ... 2517 events in all. Users can search by event type, location, year, or by any of more than fifty documented lecture tours. The powerful new website was designed by Marc Kreidler and is maintained as an educational service by the Center for Inquiry’s IT Department.

The Chronology was created in 2001 by Doug Schiffer, an IT professional from the Syracuse, New York, area. It was housed on the website of the Freethinkers of Upstate New York (FUNY), a Council for Secular Humanism-affiliated local group. The Chronology started out small but grew rapidly, thanks to Doug’s dogged research in places like the New York Public Library, Boston Public Library, and the Library of Congress. With time, a small network of Ingersoll aficionados began unearthing forgotten references to Ingersoll events.

In 2014 the original Chronology fell victim to hackers. Doug had to shut much of the site down, lest users be exposed to cyberattacks. For those who had come to depend on the Chronology, the loss was a painful blow. Fortunately Doug had preserved the site’s core data as a spreadsheet, which a few of us used when we had to – it was a far cry from working the data with a search interface! During the “dark years,” Doug kept adding new events to the database as they came up in his research.

Now the Chronology is back with an easier-to-use Web-based interface – and with the power of CFI behind it. (And yes, new items continue to be added when found. Doug still contributes behind the scenes when his research turns up new material.)

The Chronology is, simply put, the best resource in existence for answering questions like these:
*  Did Ingersoll visit my home town (or any other city that interests you)?
* When did he lecture? Which lecture did he give?
* Where did he lecture?
* Were additional details about the event recorded in the press?
* Where in the country was Ingersoll at a certain point in time?

Over the years I’ve found the Chronology invaluable in my work at the Ingersoll Museum. For instance, in 2008 the Ingersoll Museum received a gift of a rare poster promoting an Ingersoll lecture at “City Hall” on “Friday, October 11.” Which city? And which year? The poster named James Redpath as Ingersoll’s manager; it was known that Redpath had managed Ingersoll’s lecture tours only during 1878 and 1879. October 11 fell on a Friday in 1878. A check of the original Chronology did not show an event on October 11, 1878. But it did show that Ingersoll lectured in Boston on October 10 and again on October 13. So wherever “City Hall” was, it wasn’t too far from Boston. Further research pinpointed the location as Lawrence, Massachusetts. That event appears in the Chronology now, though it remains unknown which lecture Ingersoll delivered when he spoke there.

Since the Chronology came back online, I’ve used its more powerful search features to locate Ingersoll lectures in smaller communities in west-central New York State for inclusion on the Freethought Trail. I found several that had previously escaped me in Corning, Norwich, and Rome, New York. They’ll be added to the Trail later this year.

If there’s a mystery about the “Great Agnostic” that you’ve been dying to solve, the Ingersoll Chronology may be just the tool you need. It’s back, and this time (we hope) it’s up for keeps. And if you happen to know about an Ingersoll lecture or other event that’s not on the Chronology yet, please share it with us!