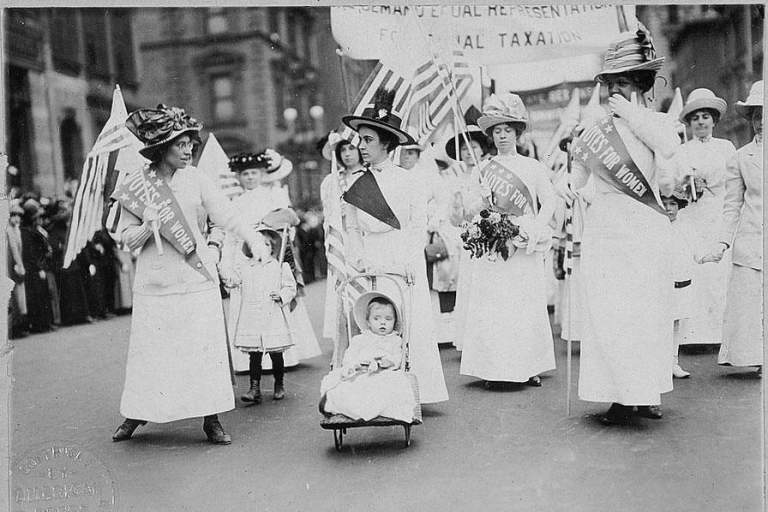 The Freethought Trail has begun its observance of the centenary of woman suffrage by expanding its core coverage of the suffrage movement. The following existing informational pages have been significantly expanded:

> The Woman's Rights / Suffrage cause page;

> The profile page for Susan B. Anthony; and

Stanton, Anthony, and Gage, New Yorkers all, were known as "the Triumvirate." They led the more radical wing of the suffrage movement during most of the second half of the nineteenth century and co-edited the first three volumes of the authoritative History of Woman Suffrage.

The expanded coverage discusses historical events in greater detail and considers the more controversial aspects of the suffrage fight. For example, suffrage leaders including Stanton, Anthony, Gage, and others sometimes disagreed profoundly on strategy and tactics; through their editing of the History of Woman Suffrage, Anthony and Stanton in particular may have unduly influenced how their movement's history would be remembered; Stanton used racist language during controversies over whether women or African Americans should be enfranchised first; and the Nineteenth Amendment did not immediately benefit women of color, who were too often precluded from voting by policies that effectively disenfranchised African Americans until well into the twentieth century.

Still, the adoption of the Nineteenth Amendment to the U. S. Constitution on August 18, 1920, merits celebration. The unveiling of these expanded interpretive pages will be the first in a series of new pages added to the Freethought Trail website between now and August 2020. This will include detailed coverage of every annual New York State suffrage convention held in the Freethought Trail's catchment area (basically west-central New York between Rochester and Utica) between 1848 and 1915.

The Freethought Trail debuted in 2005 at www.freethought-trail.org. It celebrates historic sites, marked and unmarked, important to the history of radical reform within about 100 miles of the Robert Green Ingersoll Birthplace Museum. There are many such sites -- 131, at this writing -- because west-central New York was a hotbed of social ferment during the nineteenth and early twentieth centuries. The Freethought Trail helps the curious to locate sites important to abolitionism, woman suffrage, freethought, sex radicalism, dress reform, and other radical movements, and stand "where history happened" whether a site is now unmarked, marked, or the site of a museum.

The Freethought Trail is a project of the Council for Secular Humanism, a program of the nonprofit Center for Inquiry.