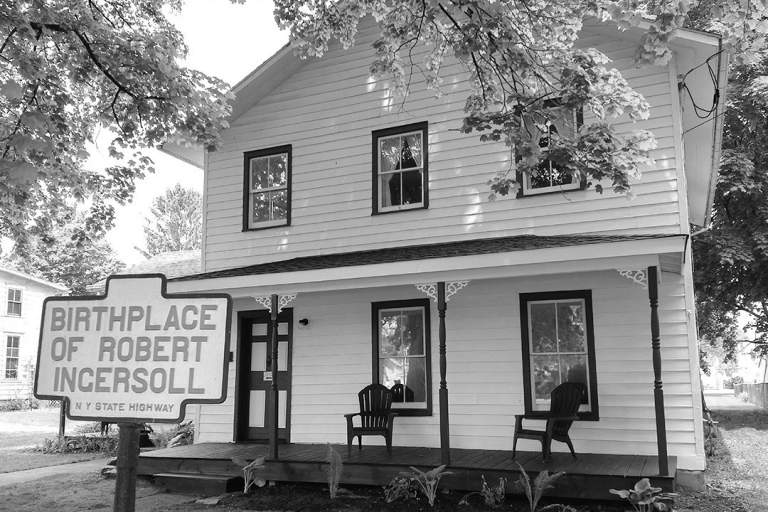 Agnostic orator Robert Green Ingersoll was born in this house on August 11, 1833. Though his family left Dresden when Robert was only four months old, this house remains the only one of Ingersoll’s many residences still standing and open to the public. Exhibits include an orientation video, a rich collection of Ingersoll memorabilia and literature, a period restoration of the room in which Ingersoll was born, and a local history room.

Ingersoll visited this site on September 24, 1889, accompanied by his wife Eva and his daughters Maud and Eva. The next day he delivered a free lecture at the Yates County Fair in nearby Penn Yan. It would be his only visit to the county of his birth.

Restorations. The house has been restored on three occasions. It was first restored in 1921 by a blue-ribbon committee whose members included Thomas Edison, Edgar Lee Masters, and Syracuse suffragist Harriet May Mills. It operated as a community center but closed for lack of funds in 1927. It was restored in 1954 by atheist activist Joseph Lewis and operated as a museum until the mid-1960s. Thereafter, it decayed. The structure was near collapse when it was purchased in 1986 by the Council for Secular Humanism. After raising and spending more than $250,000, the Council rehabilitated the birthplace and in 1993 opened it as a museum.

Further Information. The Museum is open weekends each summer and fall. For more information, see its website. It is a co-anchor of the Freethought Trail.

An interactive online Chronology indexing more than 2500 events in Ingersoll's life, including most of his public lectures, is available here.

Robert Ingersoll’s mother, Mary Livingston Ingersoll, died on December 2, 1835, in Cazenovia, New York, when Robert was three years old. Her unmarked grave site was located in December 2015 and a period-appropriate gravestone was dedicated on Memorial Day 2016.

The Buildings and Sites. The Ingersoll birthplace was built in three sections, two of which were moved to its current site. The small, gabled wing (at left when viewing the house straight-on) was erected circa 1800 in Hopeton, a failed settlement two miles north of Dresden. Early accounts suggest that most of Hopeton's small buildings were moved down the hill by sledge during winter and added to homes already in Dresden.

The main, two-story portion of the house was built on Charles Street, south and east of the birthplace's present location. This building was erected as a parsonage by members of the congregation that hired Ingersoll's father, the Rev. John Ingersoll, and his predecessors to preach in Dresden. Volunteer labor and a reliance on used wood gave this section an informal construction style.

A rear lean-to behind the small gabled wing was constructed last. after the first two wings had been united at the birthplace's present location. It is unknown when this occurred. As a result, it is altogether possible that Robert Green Ingersoll was born at the Charles Street location, not where the Museum stands now. 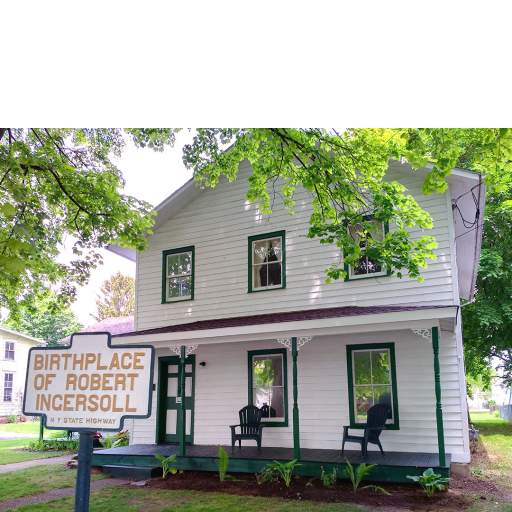 The Robert Green Ingersoll Birthplace Museum is located on Main Street in Dresden, New York (pop. approx. 300). America's foremost agnostic orator was born in the upstairs bedroom, marked by the two rightmost windows on the front of the building's second floor.

In 2016, Jeff Ingersoll added the historically accurate front porch to the main (two- story) wing of the birthplace. 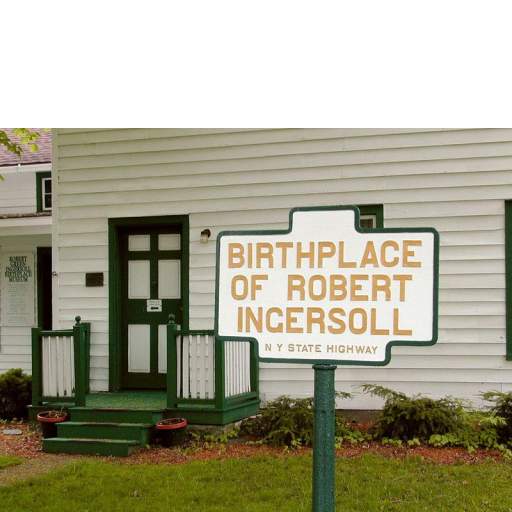 This sign marking the Robert Green Ingersoll Birthplace Museum was typical of historical markers erected by New York State during the early to middle twentieth century. Few examples survive; fewer still stand in their original locations. This sign was cleaned and painted in 2005 by Jeff Ingersoll. (This photo was taken before he restored the full front porch in 2016.) 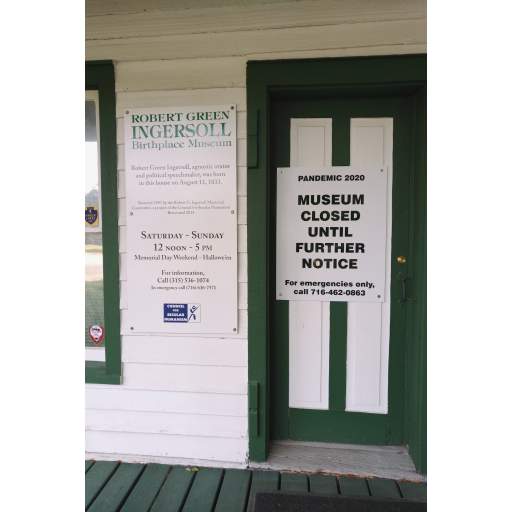 Due to the COVID-19 pandemic, the Ingersoll Museum is closed for the whole of the 2020 season. Management is hopeful the Museum can reopen normally in 2021. 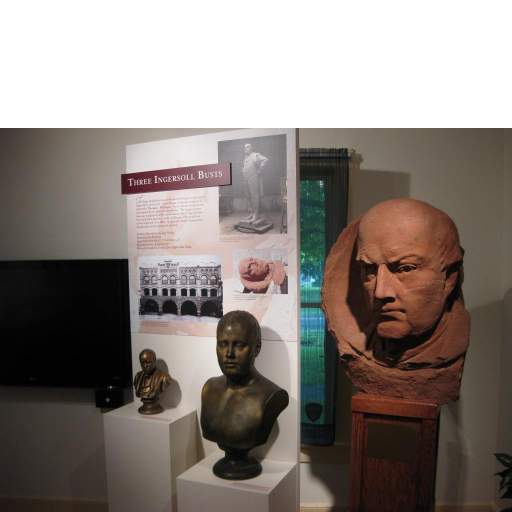 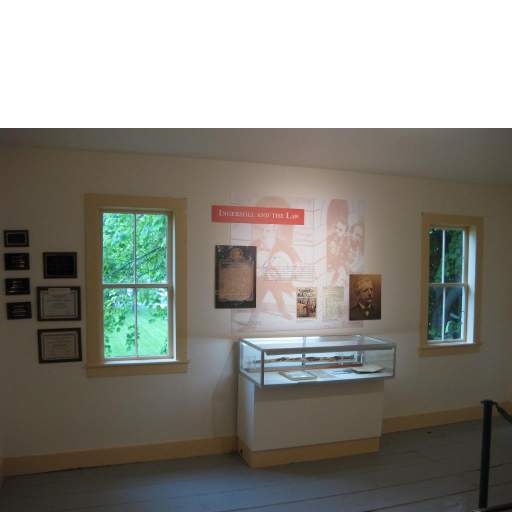 Opened to the public for the first time as part of the 2014 redesign, this additional room on the second floor houses exhibits relating to Ingersoll's birth and youth, his Civil War service, and his legal career. 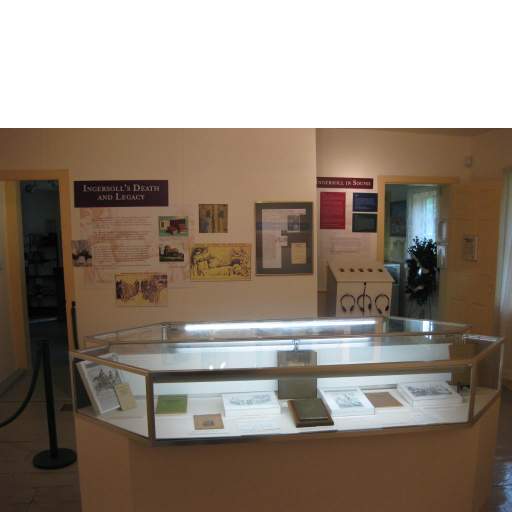 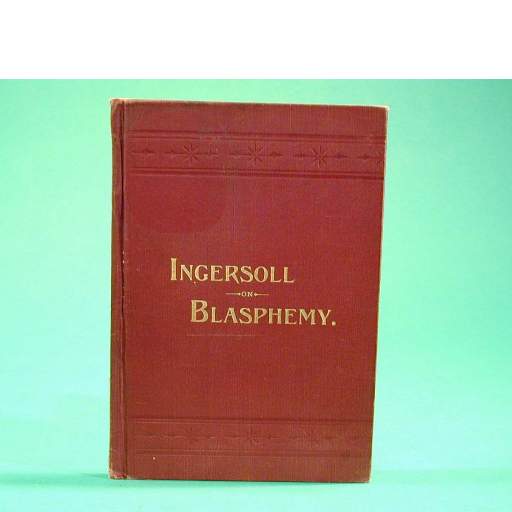 This copy was owned and inscribed by freethinker Charles Elmendorf of  Penn Yan. 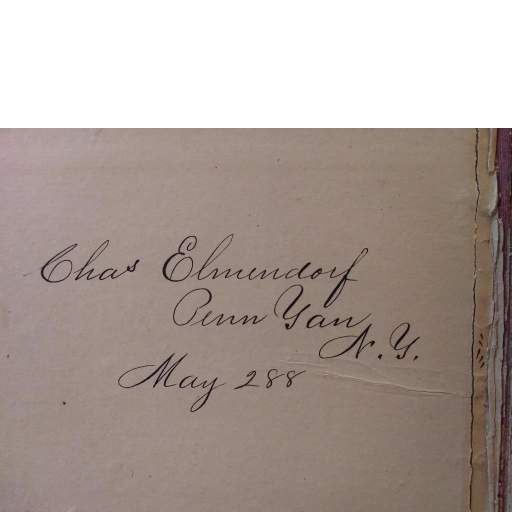 Charles Elmendorf inscribed his copy of Ingersoll on Blasphemy on the inside front cover. Presumably the date—May 2, 1888—is when he acquired the volume. This book is displayed at the Ingersoll Museum. 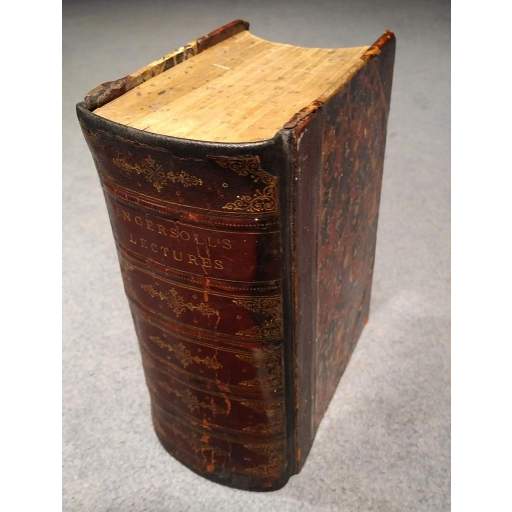 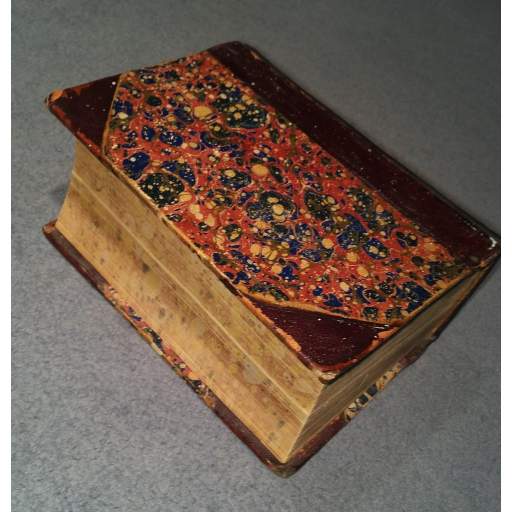 No expense was spared in binding this book, which features a tooled leather spine, marbled covers and end papers with leather corner tabs, and even marbling of the page edges. Faded to near-invisibility today, the page edge marbling would have been stunning when the book was new. 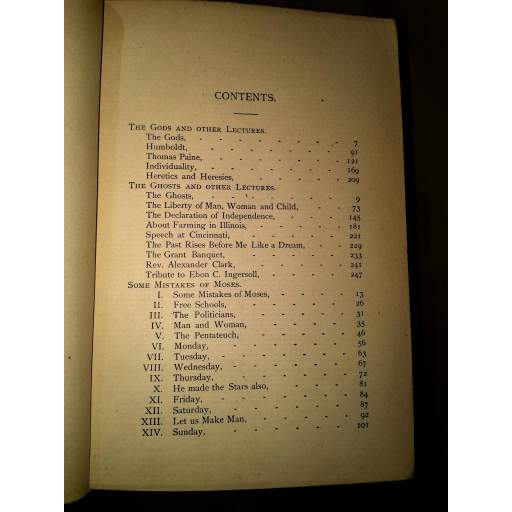 Table of contents (page 1 of 2) shows how this fat volume is made of multiple smaller titles, each retaining its own pagination. Whether this volume was assembled from excess signatures (unbound printed sheets) of the previous titles or was specially printed from those volumes' old type is unknown. 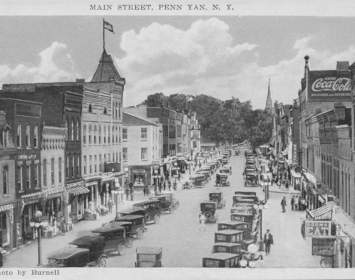 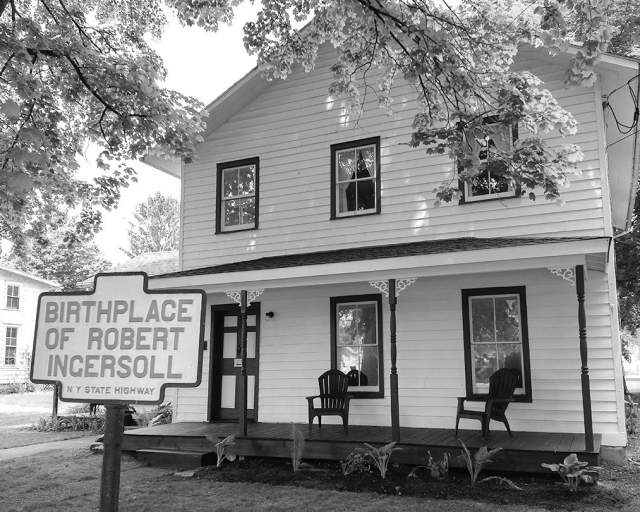 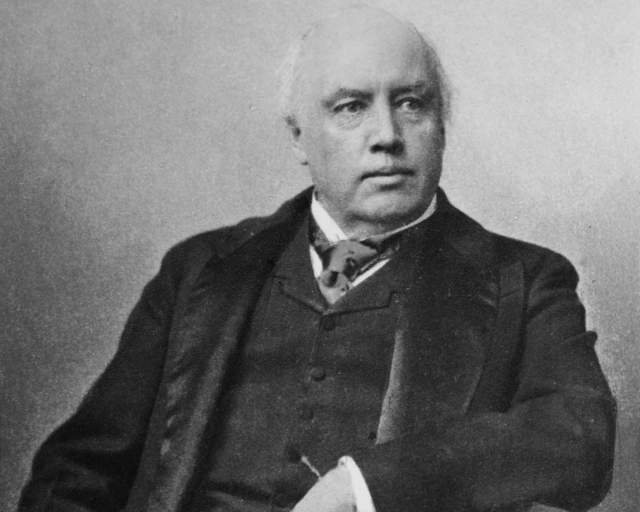