Susan B. Anthony Memorial Hall, erected in 1914, was named for woman suffrage champion Susan B. Anthony. (Nineteenth-century practice was to use the singular, woman or woman's, when referring to women as a class; later practice was to use the plural, women or women's.) Anthony Hall was a landmark on the University of Rochester’s Prince Street Campus (opened 1861, closed 1955), serving as a women’s gymnasium and meeting venue.

When the forty-sixth annual convention of the New York State Woman Suffrage Association was held in Rochester on Monday to Friday, October 12–16, 1914, one event was staged at the just-opened Anthony Memorial Hall. Presumed to be present were the nationally prominent suffragist Carrie Chapman Catt, president of the convention, and prominent regional activist Harriet May Mills. On the evening of Wednesday, October 14, a reception for convention delegates was held to honor the memory of the revered suffrage pioneer Susan B. Anthony, who had died in 1906 and so would not see the dream of suffrage fulfilled fourteen years later, on August 26, 1920.

The former Anthony Memorial Hall was divested, serving until quite recently as a home for the independent nonprofit Visual Studies Workshop. Its future is now uncertain. 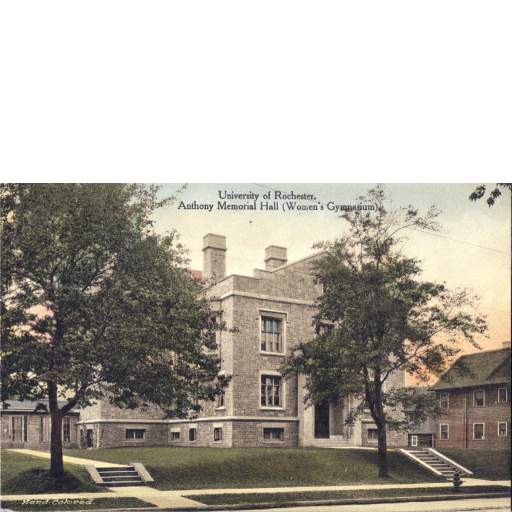