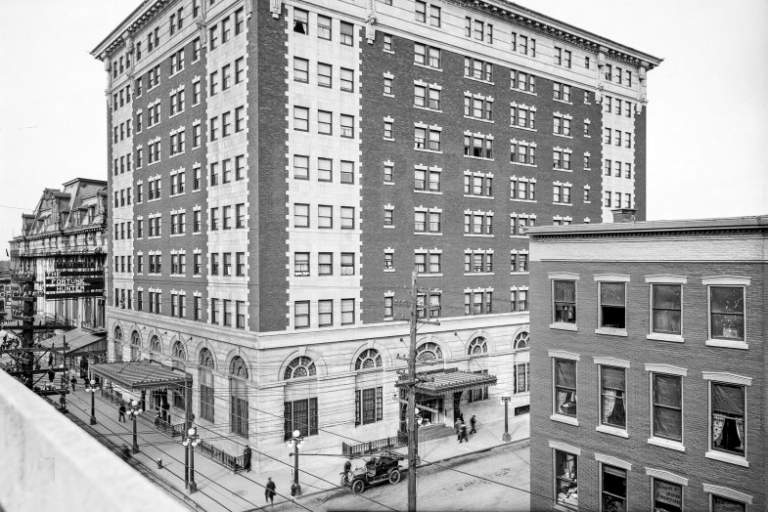 The Hotel Utica served as the headquarters of an important woman's rights event, the Forty-Fourth Annual Convention of the New York State Woman Suffrage Association (NYSWSA) held on Tuesday through Friday, October 15–18, 1912. Other venues used by the convention included Thorn Memorial Chapel, where plenary sessions were held, and the New Century Auditorium, site of an evening political event intended to attract members of the general public.

Convention Activities at the Hotel. As was usual for NYSWSA conventions, activities held at the hotel were scheduled just before and just after the principal public sessions. A meeting of the State Executive Committee was held in the morning of Tuesday, October 15; the first plenary session began at Thorn in the afternoon. On Friday, October 18, following the final plenary events, the concluding business of the convention was completed and an executive meeting was convened at the Hotel Utica.

The Building. The Hotel Utica opened on March 11, 1912, as a ten-story grand hotel. It was designed by the Buffalo architectural firm of Esenwein and Johnson. When it opened, it was Utica's foremost hostelry. Its four restaurants employed chefs hired from top New York hotels. One of them, Chef Jean Vernet, later moved on to Hormel Corporation where he helped perfect the recipe for Spam. During World War II he was loaned to the War Department, where he played a significant role in developing K-rations. One might not expect a hotel food service operation to take pride in its link to such humble culinary milestones, but it was a different time.

The hotel prospered. Four additional stories were added in 1926.

Celebrated guests of the Hotel Utica included Judy Garland, Mickey Mantle, President Franklin Delano Roosevelt and Mrs. Eleanor Roosevelt, Mae West, and Bobby Darin. The hotel declined, going out of business in 1972. It then hosted two successive adult care residences, then stood vacant for a period. The hotel was lavishly restored in 2001; its best-known guest during this period was then-U.S. Vice President Richard Cheney. Despite its glamor, the restored hotel never realized sufficient revenue to keep up on its loan payments, including a $5 million financing package from the U.S. Department of Housing and Urban Development.

In 2016, the hotel was sold again; the new owners undertook yet another renovation, reopening the facility in 2017 as the Doubletree by Hilton Hotel Utica. 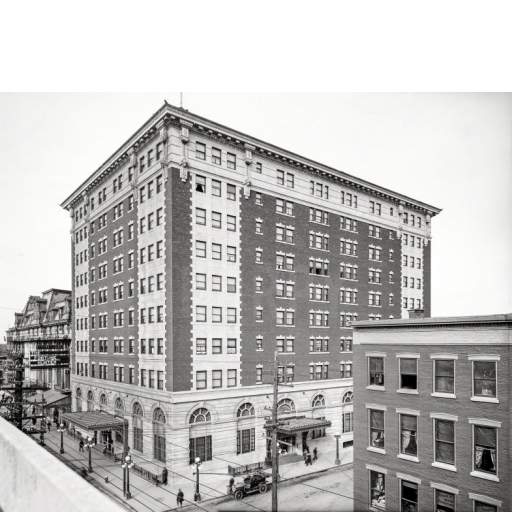 This photograph of the Hotel Utica was taken two years after the hotel's completion in 1912 (based on the release date of The Fortune Hunter, the film promoted on the Majestic Theater marquee down the block). The Majestic occupied the structure of the Utica Opera House, where freethought orator Robert Green Ingersoll lectured on five occasions between 1887 and 1894. 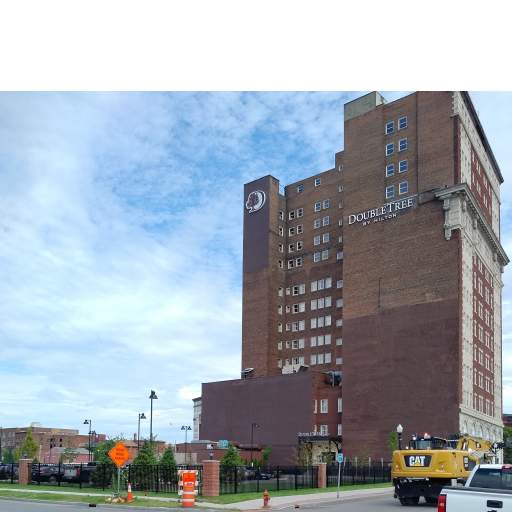 This modern-day image depicts the DoubleTree by Hilton Hotel Utica from a vantage across the street from the site of the Utica Opera House, now the hotel's parking lot. Note the four-story addition atop the hotel, added in 1926.