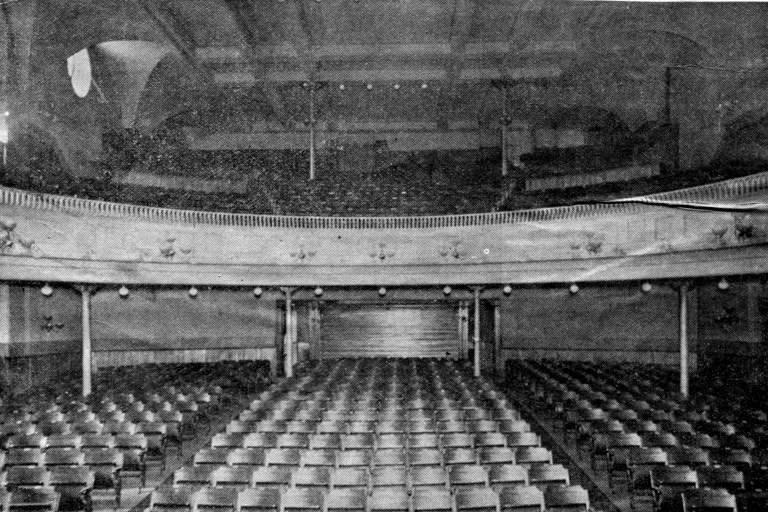 The twenty-eighth annual convention of the New York State Woman Suffrage Association (NYSWSA) was held on Tuesday, Wednesday, and Thursday, November 17–19, 1896. Music Hall, a large upstairs auditorium in what was then Rochester's YMCA headquarters, was the site of the convention's plenary sessions. At those meetings suffrage leader Harriet May Mills of Syracuse served as recording secretary for the convention. In addition, Isabel Howland of Sherwood was elected recording secretary of NYSWSA for the coming year.

The convention began on Tuesday, November 17, with an afternoon business meeting and an evening reception honoring Susan B. Anthony. Both were held at the Whitcomb House, the hotel that served as the convention's headquarters, as it had for a previous convention in 1890.

Plenary sessions in Music Hall began on Wednesday, November 18. Some 300 persons attended, mostly women, with representatives from nearly every county of New York State. The day was given over to a public business meeting, approval of committee rosters, and the presentation of committee reports. At the evening session, convention-goers were formally greeted by Rochester Mayor George Warner, after which Anthony and nationally prominent suffrage activist Lillie Devereaux Blake delivered addresses.

Plenary sessions continued on Thursday, November 19. The morning session was called to order by Rochester suffrage leader Jean Brooks Greenleaf, who had been elected president of NYSWSA at the 1890 convention and announced that she was stepping down from the post at the 1896 convention. (She remained active in the suffrage cause for the rest of her life.) Various business was conducted, including the reading of the minutes of the previous meeting by convention recording secretary Mills and the election of officers, including Howland as NYSWSA recording secretary. After presentation of a treasurer's report, the plenary session adjourned at midday.

The convention concluded with a private executive board meeting, presumably held at the Whitcomb House.

The Building and Site. After several false starts, Rochester formed an enduring chapter of the Young Men's Christian Association (YMCA) in July of 1875. There was immediate interest in erecting a new building suitable for the organization's religious work and its emerging role as an athletic center, but fundraising proceeded slowly. A site was soon secured—at the northeast corner of South Avenue (now South Clinton Avenue) and Court Street—but construction was not completed until 1890. Music Hall, an auditorium capable of seating more than 1,000 persons that occupied the second floor, opened first, on May 11. The gymnasium opened on November 3. The finished building was dedicated  only on November 7, 1890, with one-third of its $180,000 construction cost yet unfunded.

Remaining construction debt was paid down in 1901, thanks in large part to a $40,000 matching gift from Rochester inventor, industrialist, and philanthropist George Eastman.

The Rochester "Y" became markedly more successful during the first decade of the twentieth century. It became clear that a larger, even more capable headquarters building and one or more suburban branches were urgently needed. Fundraising for these new capital projects proceeded rapidly. Accounts differ as to when the YMCA vacated the South Avenue building. Some say this occurred as early as 1910, but others note that its replacement, the so-called "Central Y" on Gibbs Street, was not dedicated until 1916.

The date of the structure's demolition is unknown. But it was gone by November 7, 1927, when its replacement—the Rochester Theater—opened for business. Promoted as the largest theater between New York and Chicago, the Rochester seated more than 3,500 for motion pictures and vaudeville. It was elaborately decorated and included an immense theater organ. It was acquired by the Loew's theater chain in 1929. The Loew's Rochester, as it was called, closed in October 1964.

In the same year, architect Welton Becket was engaged to design a new headquarters on the Loew's site for Xerox Corporation, then one of Rochester's leading companies. The thirty-story Xerox Tower opened in the fall of 1967. It only served as Xerox headquarters until 1969, when the headquarters was moved to Stamford, Connecticut. (In 2007, the headquarters moved again to Norwalk, Connecticut, its present location.) Xerox occupied a decreasing amount of the Rochester building's square footage. Since 2018, it has vacated the building completely, leaving it to be occupied by other tenants. 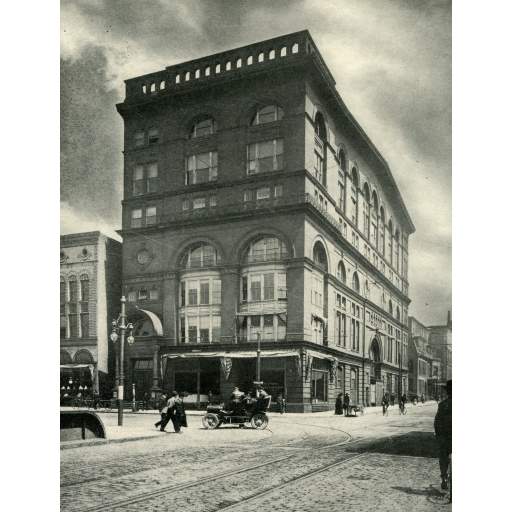 Rochester's first YMCA headquarters was dedicated in 1890 and served until sometime between 1910 and 1916. This image looks eastward, across South Avenue (now Court Street). Music Hall occupied the second floor; note the very tall windows with half-round fanlights at top. The building is only five stories high but appears to have more owing to the second floor's great height. Image courtesy of William Keeler, Rochester Historical Society. 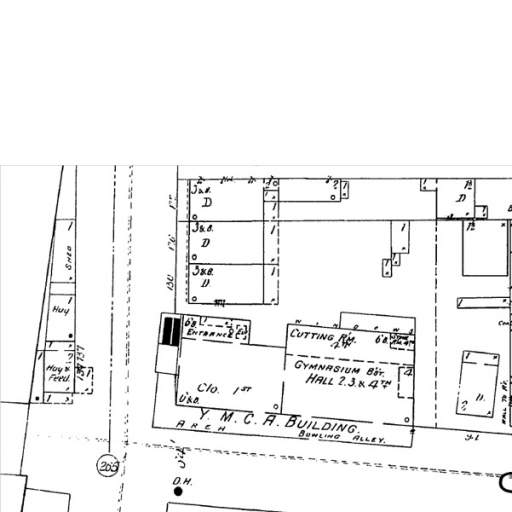 In this 1892 city map, South Avenue (now Court Street) runs left-to-right; South Clinton Street runs up and down. The YMCA Building occupies the northeast corner of Court and South Clinton. 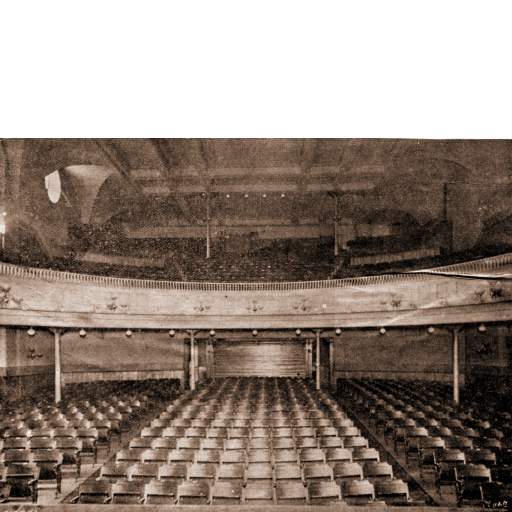 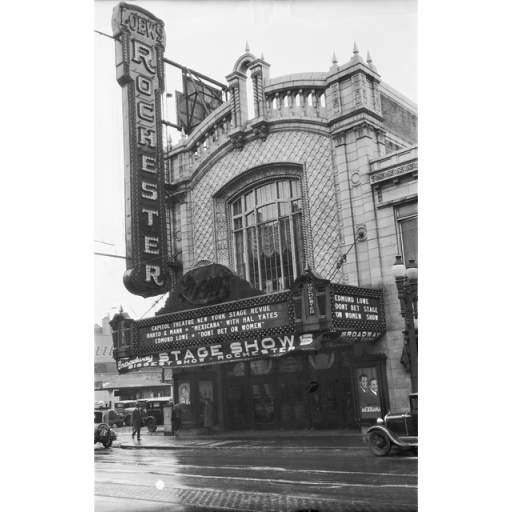 Replacing the YMCA building on its site was the Rochester Theater (opened 1927), which in 1929 became the Loew's Rochester Theater. The theater operated until 1964 and was razed to make way for the Xerox Tower. 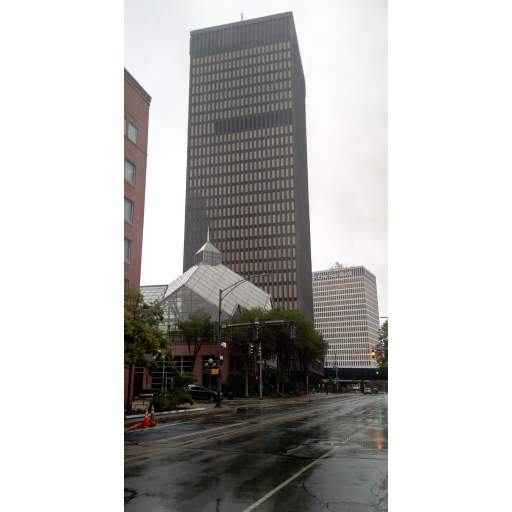 The site of the YMCA and Music Hall is now occupied by Xerox Tower, a thirty-story skyscraper completed in 1967. 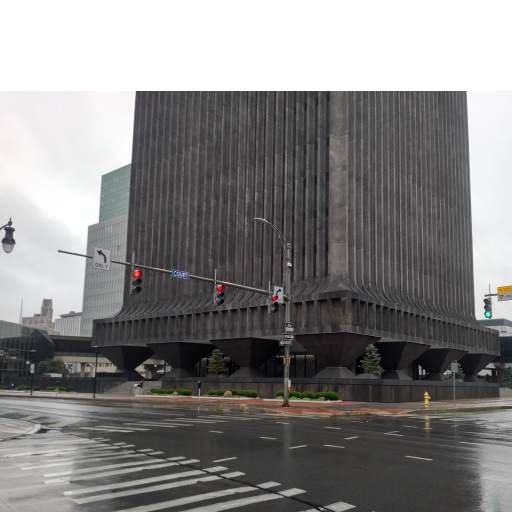 Closer view of the base of Xerox Tower, at the corner of Court Street and South Clinton, the site occupied by the 1890 YMCA building and later by the Loew's Rochester Theater.