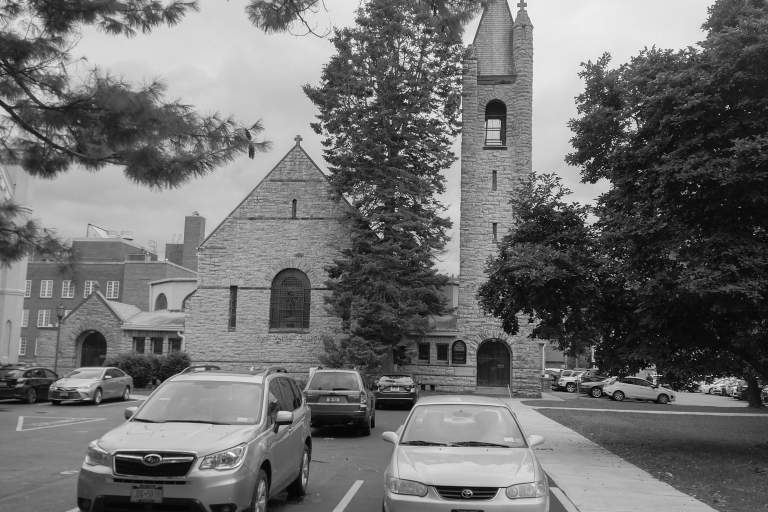 1894 Local Suffrage Meeting. On Tuesday–Thursday, March 27–29, 1894, the Tompkins County Political Equality League—an independent county-level woman-suffrage advocacy organization—held a three-day meeting comprising public events at Library Hall and First Baptist Church. At the time, New York State suffragists were canvassing for petition signatures. A state constitutional convention was upcoming later that spring, and the the petition sought removal of the word male from the constitution's list of the qualifications required of New York voters.

Though the sponsoring organization was local and unaffiliated with the NYSWSA, the meeting nonetheless attracted two speakers of national prominence: veteran suffrage campaigner Susan B. Anthony of Rochester, and Anna Howard Shaw, a leading suffragist, physician, and one of the first women to be ordained a Methodist minister.

Ithaca Mayor Clinton D. Bouton gave an enthusiastic endorsement of the suffrage movement. (His wife, Carrie E. Bouton, chaired the Tompkins County Political Equality League.) Mayor Bouton was also an advocate for temperance; in his remarks, he predicted that when woman gained the ballot, an early result would be the "downfall of the saloon." This was an argument for woman suffrage frequently made by advocates of temperance and/or prohibition.

James Edward Oliver, originator of the mathematics program at Cornell University and member of the National Academy of Sciences, gave what historians Carol Kammen and Elaine Engst termed "a thoughtful argument in favor of granting woman the franchise.”

Professor Oliver then introduced Susan B. Anthony, who regaled the near-capacity crowd for almost two hours. She discussed her past work for suffrage and celebrated the growing number of work opportunities available to women, but decried the lack of equal pay for equal work. “Our work is to get the constitution of this state amended by striking out the word male," Anthony proclaimed. "We mean to place before the constitutional convention a petition requesting this change that shall be signed by one million people, men and women. We want the men’s names for their political influence and the women would put a stop to the old taunt that women do not want the vote.”

The Tompkins County Political Equality League meeting concluded on Thursday, March 29, with a sweeping oration by Shaw at Library Hall. The "darkest stain upon the country is the disregard for women," she declared.

Petition and Constitutional Convention. After the meeting, Tompkins County suffragists launched an intense canvassing drive to garner petition signatures. Activists across the state did likewise. Anthony's dream of a million signatures was not realized. But the 600,000 signatures actually obtained set a record.

The New York State Constitutional Convention of 1894 opened in Albany on May 5 and closed on September 13. It achieved many things, most notably a constitutional requirement that New York's Adirondacks region (now Adirondack Park) be preserved "forever wild." But it did not remove the bar to voting by women. On November 6, voters approved the Fourth Constitution of the State of New York, which still demanded that New York voters be male. On January 1, 1895, the new Constitution went into effect.

The twenty-sixth annual convention of the NYSWSA was scheduled for Ithaca in mid-November. "The cry after Albany," wrote historians Kammen and Engst, "was ‘On to Ithaca.’"

1894 Suffrage Convention. The twenty-sixth annual convention of the New York State Woman Suffrage Association was held at Ithaca on Monday through Thursday, November 12–15, 1894. Convention headquarters was the Clinton House hotel. Public meetings were held at the Lyceum Opera House and Library Hall. No events of the 1894 suffrage convention took place at First Baptist Church.

1911 Suffrage Convention. The forty-third annual convention of NYSWSA was held at Ithaca on Tuesday through Friday, October 31–November 3, 1911. Ithaca was chosen as the convention site because in 1908, the local Political Study Club (an independent pro-suffrage organization) received a prize for the “largest increase of membership” among local suffrage organizations in New York State.

On Tuesday, October 31, proceedings opened with a private meeting of NYSWSA's Executive Committee at First Baptist. The first public session began at 2:00 p.m., also at First Baptist. NYSWSA president Harriet May Mills gave the principal address, noting that during the year to date, the states of Washington and California had adopted woman suffrage after vigorous campaigning. (Nineteenth-century practice was to use the singular, woman's; later practice was to use the plural, women's.) Concerted activism was yielding slow progress, Mills reported; though the state house still had not acted on a suffrage bill introduced after the failure of the Constitutional Convention to implement suffrage, the state senate had advanced such a bill to its third reading. (That bill failed; New York enacted woman suffrage only in 1917.) “The successes of the past year are great,” Mills declared. "They warrant more in the near future and fill us with fresh courage as we journey toward the promised land of freedom and equality."

On Wednesday, November 1, delegates convened again at First Baptist to conduct routine business. County groups made their reports. Helen Brewster Owens, chair of the press and resolutions committees, introduced a series of resolutions repeating the call to strike the word male from the state constitution.

National-level suffrage leaders Inez Milholland and Anna Howard Shaw, scheduled to speak on Wednesday, were delayed in reaching Ithaca. Millholland (like California delegate Mary Morrison) never made it to Ithaca at all.

In the afternoon, there was a concert at Sage Chapel on the Cornell Campus and a talk by Jacob Gould Schurman, Cornell’s president.

On Thursday, November 2, the public session began, again at First Baptist, with an organizers’ conference. This was a workshop where local-group presidents, treasurers, corresponding secretaries, and the like met in separate rooms to sharpen their skills. Afterward, delegates reconvened in a plenary session to elect officers for the coming year. Prominent regional activists Emily Howland, Ella Hawley Crossett, Eliza Wright Osborne, and others spoke in memory of revered Geneva campaigner Elizabeth Smith Miller, who had died on May 22, 1911, aged eighty-eight.

Anna Howard Shaw having belatedly arrived, she delivered her address (which had been scheduled for the preceding day) on Thursday evening, speaking before an overflow audience at First Baptist.

On Friday, November 3, there was a brief general meeting at First Baptist, beginning at 9:00 a.m., to conclude unfinished business. At 10:00 a.m., NYSWSA's Executive Committee convened at the Ithaca Hotel, after which the forty-third annual convention of NYSWSA drew to a close.

The Building and Site. The present First Baptist Church was designed by Ithaca architect William Henry Miller and dedicated in 1890. It was the congregation's fourth church. Like its predecessors, it occupied land adjacent to Ithaca's DeWitt Park, which the congregation purchased shortly after its founding in 1826. Construction of the 1890 church was promoted by Cornell president Schurman and prominent donors including John D. Rockefeller, who gave $12,000 as a challenge grant. Architect Miller donated his services.

The Romanesque Revival–style building is built largely of rusticated grey limestone with accent courses of local siltstone. It is one of several churches that surround DeWitt Park. When looking toward the church from North Cayuga Street, First Baptist is all but invisible; one must walk eastward into the park and cross much of its expanse before First Baptist comes into view.

First Baptist Church is included in the locally designated DeWitt Park Historic District. In addition, it is listed on the State and National Registers of Historic Places. 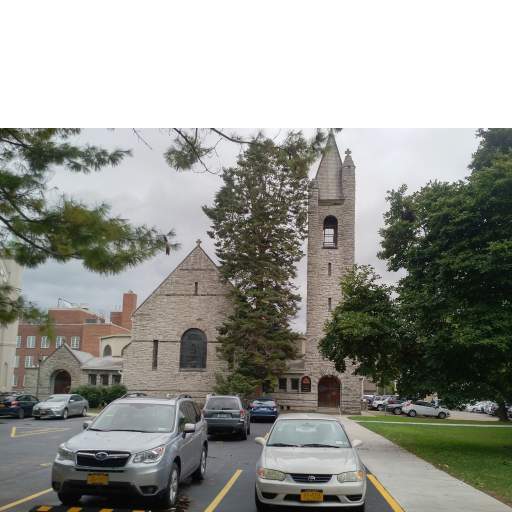 The present First Baptist Church was dedicated in 1890. Designed by Ithaca architect William Henry Miller, it was the congregation's fourth church. Like its predecessors, it occupied land adjacent to Ithaca's DeWitt Park, which the congregation purchased shortly after its founding in 1826. 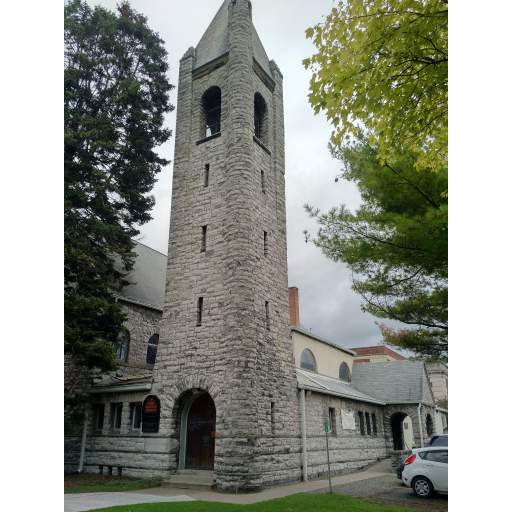 A closer view of the church emphasizes its tower. The tower tapers as it rises, ending in a pyramidal slate roof trimmed with copper. At the top, the tower's four corners thrust into relief, projecting stone pillars at three corners and a stylized turret at the fourth. 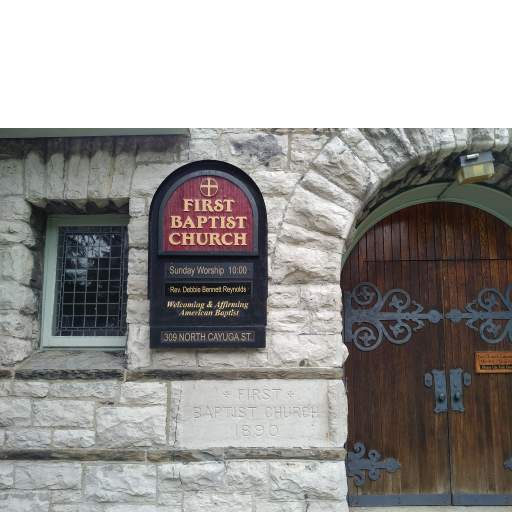 The main entrance to First Baptist Church. Below the sign is the cornerstone giving the construction date of 1890. 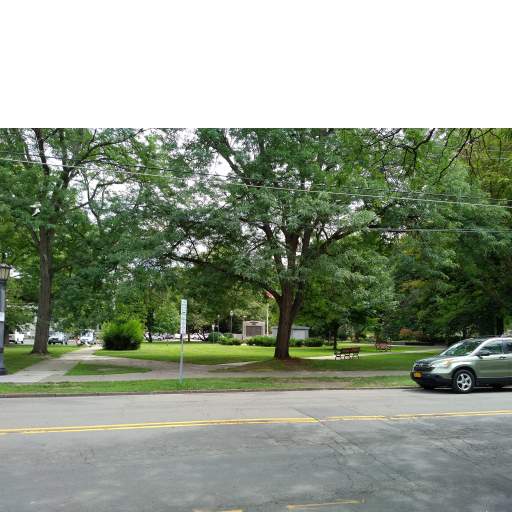 Ithaca's DeWitt Park is surrounded by historic churches, some of which (First Baptist included) are not visible from the street. This view looks east, across North Cayuga Street and into the park. First Baptist stands behind the parking sign to the left of the memorial tablet, obscured by trees. Walking into the park will reveal otherwise unseen churches flanking the park to either side, and at the end, the classic form of First Baptist.