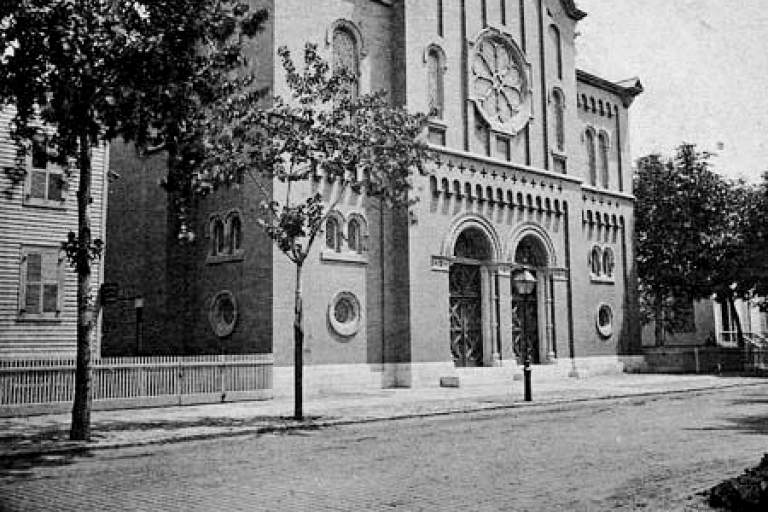 Two state conventions of the New York State Woman Suffrage Association (NYSWSA) held their plenary sessions in the old First Universalist Church on this site. Those conventions occurred on December 16–18, 1890, and October 24–27, 1905.

The 1890 Convention. The twenty-second annual NYSWSA Convention began on Tuesday, December 16. After a morning executive committee session held at the Whitcomb House Hotel at 209 East Main Street (which served as the convention's headquarters), the public portion of the event opened with a plenary session held at First Universalist. It was chaired by nationally prominent reformer Lillie Devereux Blake. Jean Brooks Greenleaf, president of the Woman's Political Club of Rochester, greeted delegates, making reference to the influential 1848 convention, which had been held in Rochester just two weeks following the famed convention at Seneca Falls—which had first thrust woman's rights and the goal of woman suffrage onto the national stage. Abolitionist and sometime woman's rights campaigner Emily Howland was named to the convention's Credentials Committee, Resolutions Committee, and its Nomination Committee.

In the late afternoon, Susan B. Anthony gave the convention's keynote lecture at a gala reception held at the Chamber of Commerce offices, atop the Rochester Savings Bank building at 47 West Main Street. The Chamber donated the use of its space for this event. An estimated 600 persons attended the reception, among them D. J. Hill, President of the University of Rochester. Nationally prominent suffragist Anna Howard Shaw was among those who spoke, saying in part: "The rights of women will never be freely accorded them at the polls. ... If there is anything to be done for the enfranchisement of women, it can only be done by organized effort."

On Wednesday, December 17, the meeting reconvened at First Universalist. Susan B. Anthony lectured again. She declared that "Temperance and other organizations are all right, but they will never bring about great results until the women who are their moving spirits are given the ballot. ... I say now, as I have always said, that when we have the right to vote, then, and not until then, will our voices be heard in any movement we take up." Anthony then read a letter to the convention from Elizabeth Cady Stanton. A closing address was delivered by Shaw. Jean Brooks Greenleaf was elected president of NYSWSA, a post she would hold until the next time the association convened in Rochester, in 1896.

The final plenary session was followed by an executive session at the Whitcomb House, at which Anthony, Stanton, and Matilda Joslyn Gage were appointed honorary vice presidents of the NYSWSA.

On Thursday, December 18, a concluding business meeting was held at the Whitcomb House.

The impetus for the convention had been a letter Mills wrote to Rochester's Political Equality Club suggesting that it host the 1905 convention.

On Tuesday, October 24, the opening plenary session focused on business matters with about 150 persons in attendance. Miller was named to a standing committee. In the late afternoon, Anthony hosted a reception at the Powers Hotel; Mills was among those present.

Available records do not permit a day-to-day reconstruction of the convention's remaining agenda. It is known that Mills addressed the plenary session on the convention's second day. At some point, Anthony presented legendary antislavery activist (and Auburn resident) Harriet Tubman to the convention, praising her as a "living legend." The convention responded by giving Tubman a standing ovation.

A second reception was hosted by Anthony at her Rochester home; Anthony, Mills, and Shaw spoke at this event.

Immediately following the convention, the Rochester Political Equality Club, which had sponsored the convention, announced that the event had ended in financial surplus thanks to generous contributions made by convention attendees.

The Building and Its Successors. Organized in 1846, Rochester's First Universalist Church erected a building in a traditional style on the southeast corner of East Main and South Clinton Streets in 1847. The building was remodeled and rededicated in 1871, then further remodeled and expanded in 1901. Still, in 1906 a developer who sought the church's site for a new hotel made an irresistible offer. The congregation sold its property and set out immediately to erect a new church three blocks south of its old location.

The seven-story Seneca Hotel opened on the old church site on September 14, 1908. Designed in the Beaux-Arts style, it boasted 300 guest rooms, a ballroom, and other amenities. In 1924, a high-rise tower and shopping arcade were added; with 502 rooms, the Seneca became Rochester's largest hotel. In 1952, the hotel was sold to Manger Hotels, then the nation's largest family-owned hotel chain, and operated under that name. The structure was demolished circa 1969 and replaced by Midtown Plaza, the nation's first indoor mall. Initially successful, the mall later stagnated and was partially razed in 2008. The site is now occupied by a three-story office complex—a fragment of the Midtown Plaza complex, which has been extensively remodeled. It hosts the Rochester Democrat and Chronicle newspaper, some Gannett Company news operations, and the offices of a telecommunication company.

First Universalist's present church at 150 South Clinton Street was designed by prominent architect Claude Bragdon in the Romanesque Revival style. It was erected in 1907 and dedicated in October 9, 1908. It continues to serve the congregation today. 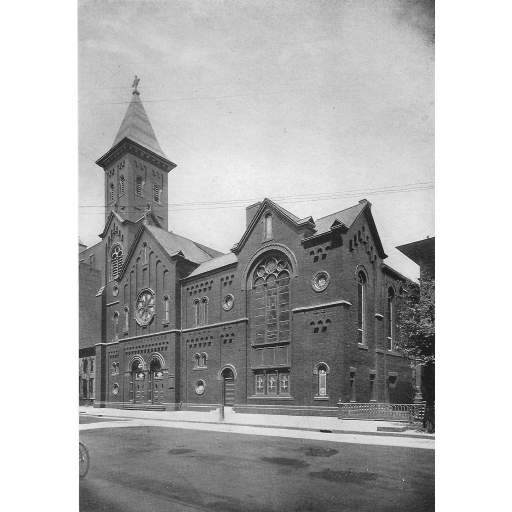 Photo of the original First Universalist Church at the corner of South Clinton and East Main Streets. 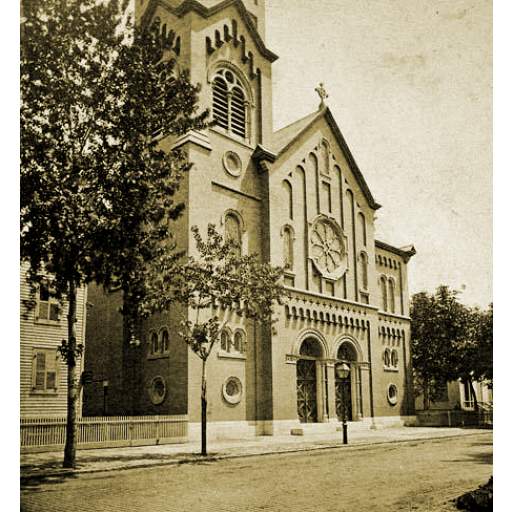 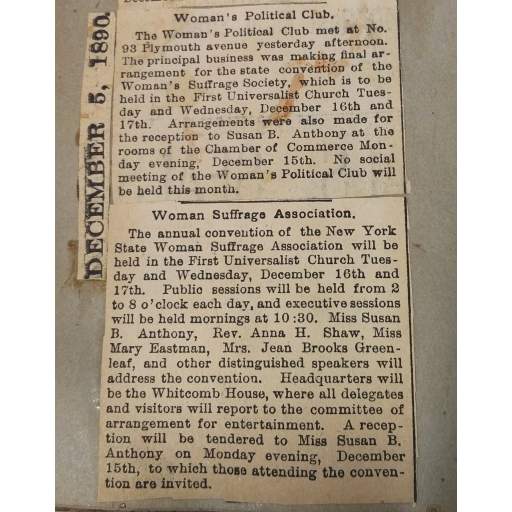 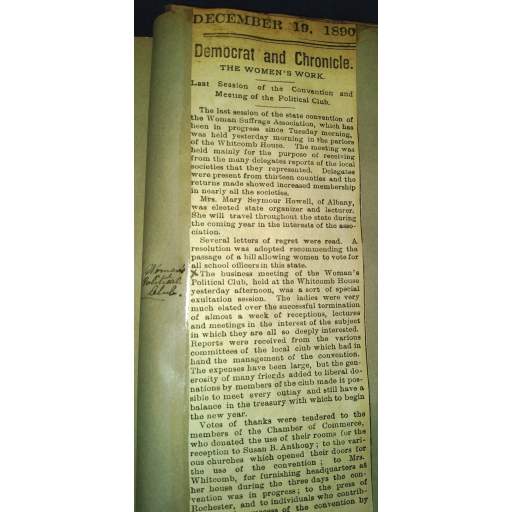 This clipping from the Rochester Democrat and Chronicle newspaper describes some proceedings of the 1890 convention. Rochester Historical Society collection. 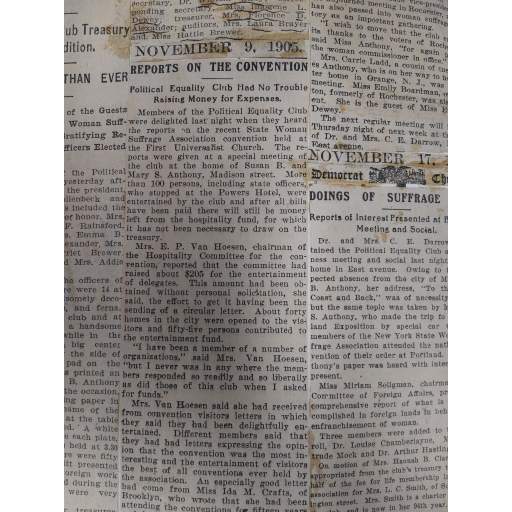 This newspaper article reports on the successful conclusion of the 1905 convention as announced by its primary sponsor, the Rochester Political Equality Club. Rochester Historical Society collection. 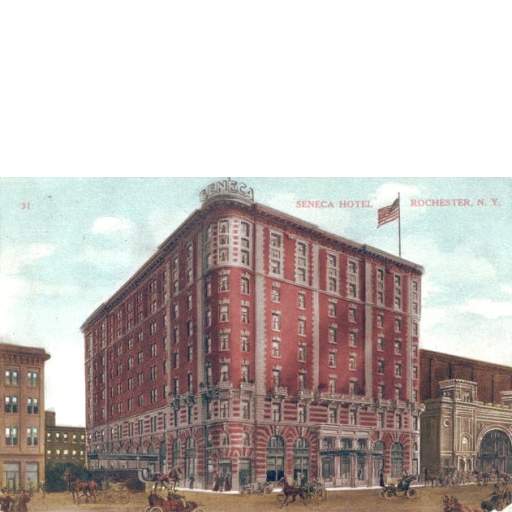 Postcard image of the Hotel Seneca, which replaced the 1847 First Universalist Church, upon its opening in 1908. 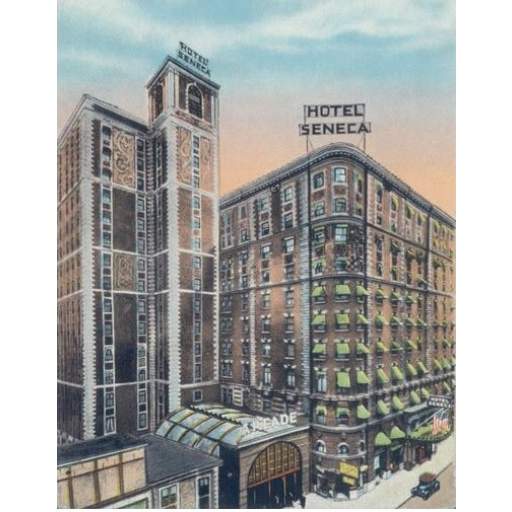 This post-1924 postcard depicts the Hotel Seneca with its new high-rise annex and its shopping arcade. At this point it was Rochester's largest hotel. 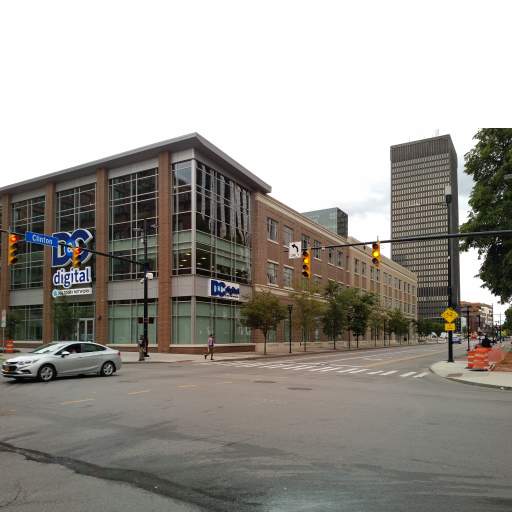 On the First Universalist Church site, a fragment of the Midtown Plaza complex  has been reconstructed as the digital media center of the Gannett-owned Rochester Democrat and Chronicle. At right, an annex built in matching style houses the Windstream telecommunications firm. 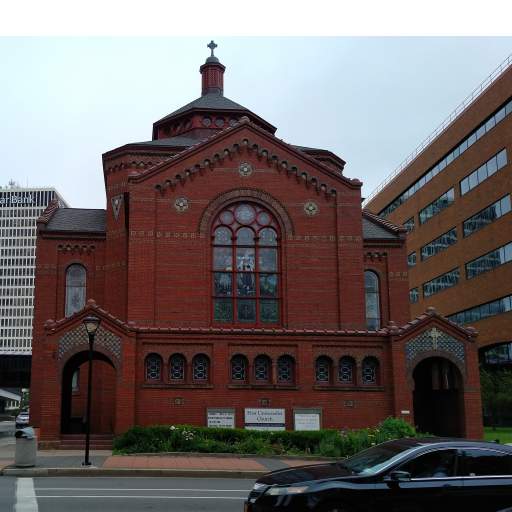 Front view of the Beaux-Arts 1907 First Universalist Church designed by Claude Bragdon, which still stands, and houses that congregation today. 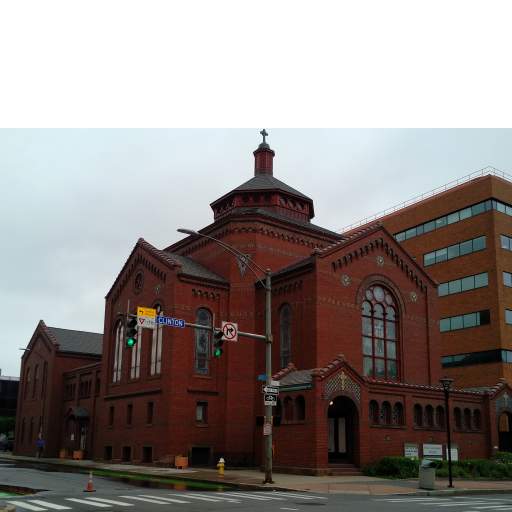 Three-quarter view of the 1907 First Universalist Church at the intersection of South Clinton and Court Streets. 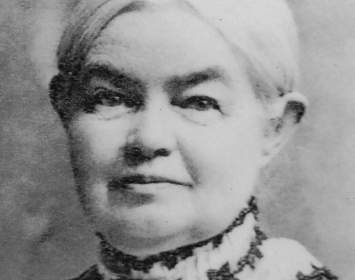