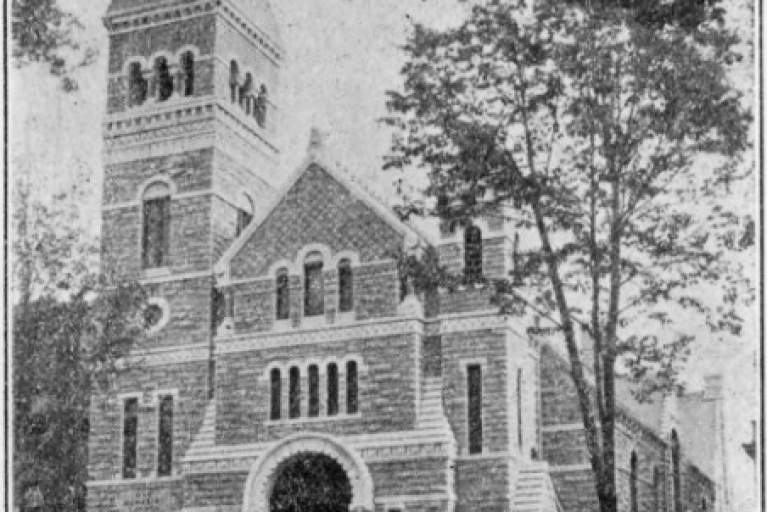 The thirty-eighth annual convention of the New York State Woman Suffrage Association (NYSWSA) was held in Syracuse on Tuesday through Friday, October 16–19, 1906. Plenary sessions were held at this church. The Yates Hotel downtown served as convention headquarters. Speakers included (in alphabetical order):

Events of the Convention. The convention began on Tuesday, October 16, with a nonpublic Executive Meeting at the Yates Hotel, which began at 11:00 a.m.

Delegates convened at May Memorial Church at 2:00 p.m. to hear introductory remarks by NYSWSA president Crossett.

The Syracuse Political Equality Club hosted a reception for all delegates at the Yates Hotel from 8:00 to 10:00 p.m. that evening.

The session of Wednesday, October 17, began at May Church at 9:30 a.m. The morning session was devoted to business. The afternoon session began at 2:00 p.m. and featured further reading of minutes, county reports, a prize essay by student Clara B. Crittenden, and "conferences" (breakout workshops) focusing on "methods of work" (such subjects as membership, program quality, and "how to increase the enthusiasm of members").

The evening session, which started at 8:00 p.m., featured major addresses.

Delegates reconvened at May Church at 9:30 a.m. on Thursday, October 18. Again, the morning was devoted to business. The afternoon session began at 2:00 p.m. It was given over to the report of the Resolution Committee, presented by committee chair Clara H. Woodruff of Buffalo; a report by Mary T. L. Gannett on the Susan B. Anthony Memorial Building, then being planned at the University of Rochester; and the reports of miscellaneous committees and of the Young People's Clubs, a youth outreach program.

From 4:30 to 6:00 p.m., a reception was held for delegates, officers, and speakers at the home of Mrs. C. D. Mills and her daughter, NYSWSA officer Harriet May Mills. (C. D. B. Mills, an abolition and freethought activist and Harriet's father, had died in 1900).

Delegates reconvened at May Church at 8:00 p.m. for the evening session. It featured addresses by Hornellsville suffragist and elected school board member Anna C. Etz; young suffragist Caroline Lexow, who spoke on "The Evolution of Practical Propaganda of Woman Suffrage in Relation to College Women"; and Julie Regula Jenney, Syracuse's first woman attorney, who spoke on "The Legal Status of Women: Fact and Theory." Avery delivered the evening's keynote, "The Progress of Woman Suffrage in Europe."

On Friday, October 19, the final plenary session at May Church began at 9:00 a.m. It included minutes of the previous day's meeting, discussion of constitutional amendments, and any unfinished business.

The Building and Site. This structure was the fourth home of Syracuse's Unitarian congregation. The congregation's first home was the Little Tabernacle, dedicated in January 1839. It stood on East Genesee Street near where modern-day East Genesee ends at State Street. The site is now occupied by the Hiscock and Barclay Building (now Barclay Damon Tower), a major office building. In 1843 the congregation moved to the Church of the Messiah, on the south corner of Lock Street (now State Street) and Burnet Avenue. An 1852 windstorm heavily damaged this structure. A new building, designed by Syracuse architect and congregation member Horatio Nelson White, was erected on the same lot. It was dedicated on April 14, 1853. Some thirty years later, the congregation chose to abandon the 1853 church due to intolerable noise from nearby railroad tracks. That church was demolished on an unknown date; the site is now a parking lot adjacent to Interstate 690.

On October 20, 1885, the congregation dedicated a significantly larger building, naming it the May Memorial Church in honor of prominent Syracuse minister, abolitionist, and woman's rights activist Samuel Joseph May (1797–1871). Once again, White was the architect. The new church was built of Onondaga limestone. With a banked floor, cherry-wood pews seating 500, and ten impressive stained-glass windows, this was the site of the NYSWSA convention.

By the early 1960s, the congregation had outgrown the 1885 building. After a prolonged architect search process, a new church was designed and erected at a more suburban location. The James Street property was sold in September 1964, providing funds used to equip and furnish the new church. The May Memorial Unitarian Universalist Society at 3800 East Genesee Street was dedicated on October 10, 1965.

By this time, the 1885 church had already been demolished.

As for the site of the 1885 church, it too is now a parking lot, situated between two small hotels.

Thanks to Roger Hiemstra for research assistance. 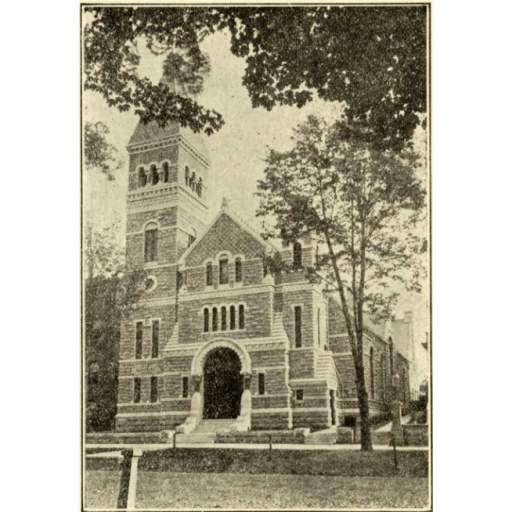 Designed by Syracuse architect Horatio Nelson White and dedicated in 1885, May Memorial Church provided an imposing site for the plenary sessions of the 1906 convention of the New York State Woman Suffrage Association. 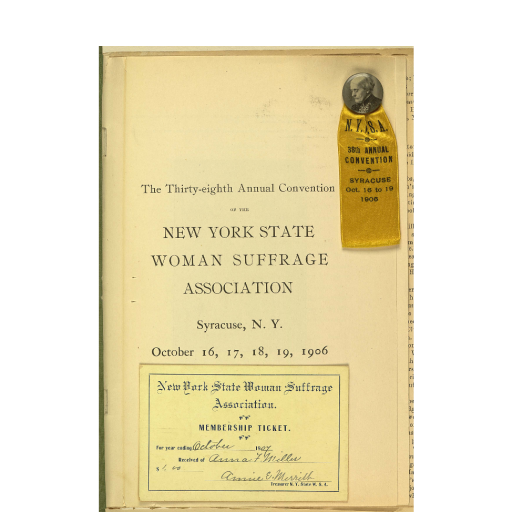 Title page of the program for the thirty-eighth annual convention of the New York State Woman Suffrage Association (NYSWSA) in Syracuse in 1906. This copy belonged to Anne Fitzhugh Miller, daughter of pioneer suffragist and Bloomers designer Elizabeth Smith Miller (1822–1911). Attached to the title page are Miller's NYSWSA membership ticket and her convention ribbon. Pictured on the pin atop the ribbon is Susan B. Anthony, who died just seven months prior to the Convention. 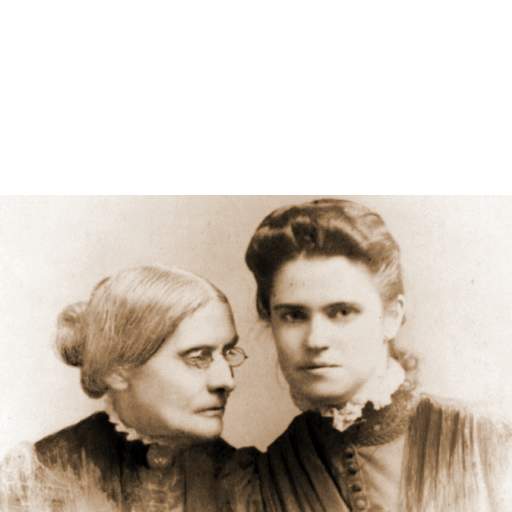 Rachel Foster Avery (right) is shown with Susan B. Anthony in an 1890 photograph. Avery spoke at the 1906 NYSWSA convention in Syracuse.

Julia Regula Jenney was the first woman attorney in Syracuse and a regionally prominent suffragist. In 1920 she would be named New York's first woman assistant attorney general. She spoke at the 1906 NYSWSA convention. 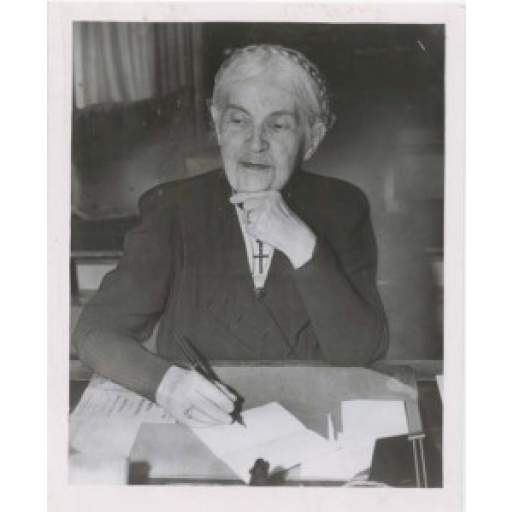 Mary T. L. Gannett of Rochester, presumably connected to the Gannett family that founded USA Today, spoke at the 1906 NYSWSA Convention on plans to erect a Susan B. Anthony Memorial Hall on the old Prince Street campus of the University of Rochester. The project was completed in 1914; when the forty-sixth annual NYSWSA convention was held in Rochester in that year, delegates attended a reception at the brand-new Anthony Hall. 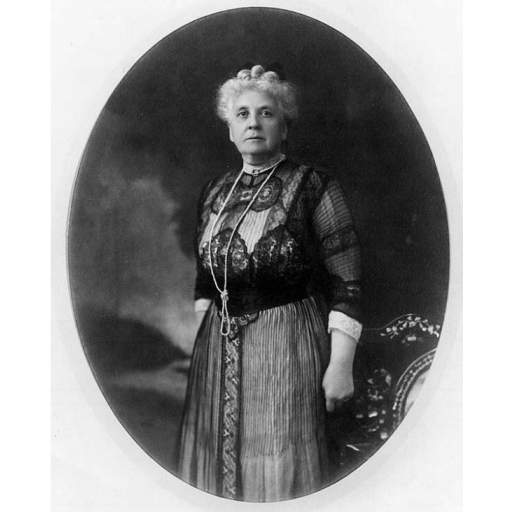 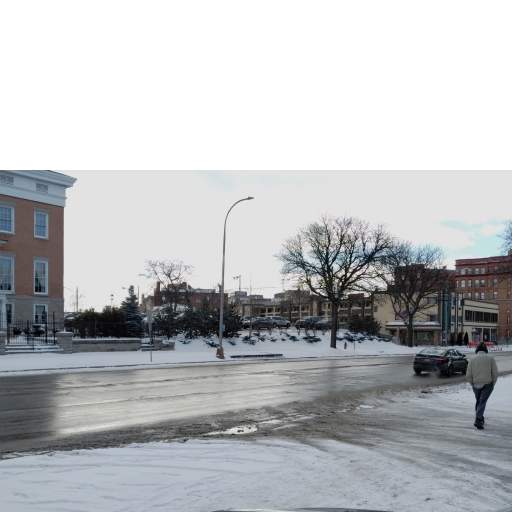 The former site of May Memorial Church is now a parking lot located between the Century Club (far left), a reciprocal dining establishment, and a Quality Inn and Suites (far right).